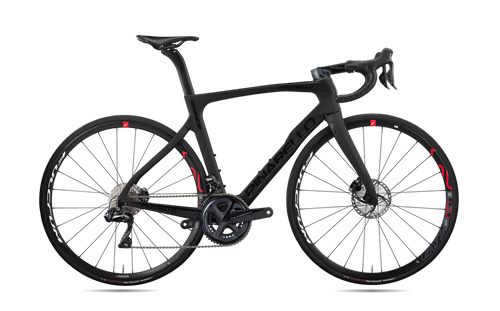 Fausto Pinarello was famous for saying that the Pinarello Dogma F10 had no intentions of releasing a disc-brake model of their World Tour-winning superbike. Less than a year later, Pinarello released the F10 Disk, which offered the same legendary performance with the added reliability of disc brakes. Now Pinarello releases the 2020 Pinarello Prince FX Disk Ultegra Di2, which again takes the top-spec capability of the Prince FX and adds the precision, security, and functionality of disc brakes.

While the standard Prince and Prince FX are the successors to the Gan S and Gan RS respectively, the Prince FX Disk is a new model all together. The Prince FX Disk Ultegra Di2 starts with Toray T900 carbon, the same found on the rim brake model. While a slightly lower grade carbon than the Dogma, the T900 carbon construction is incredibly stiff and responsive, giving the bike a race-ready feel.  It shares many similarities with the Dogma F10, down to the front is the Pinarello Onda fork, updated with the characteristic fork flaps first found on the Pinarello Bolide. The downtube receives an updated Flatback profile to come much closer to the Dogma as well, with the tubes further optimized for aerodynamics around water bottles. Unlike the Dogma F10, the Prince FX features a more integrated design with the fork that brings the downtube closer to the front wheel for greater aerodynamics around the fork crown and downtube.

One of Pinarello’s biggest updates comes from an update to fit 28c tires with room to spare. Combine this with Pinarello’s typically-Italian road bike geometry, and the Prince FX Disk rides about as well as one would expect. While it lacks the otherworldly agility of a Dogma F10, it still feels seriously responsive, whether by handling or out of the saddle. There’s still that familiar feel, however; it simply wants to race ahead and carry as much speed as possible. Few other bikes on the market match this bike’s level of performance in regards to sheer ride performance, and even fewer bikes share this bike’s level of useable technology.

Stay in the know!